If you’re using Google sheets and you want to count the number of cells in a range that have text in them, as in text and not a number value, there’s a relatively easy way to do it. But, there are some hiccups with it and so we’re going to go through the easy way and a way which is a little bit more complicated but is more accurate. This tutorial will show you why each one works and which to use.

The COUNTIF may be all you need

Column B has, we’re not going to count the header, two cells with text in it and we got that by using the formula COUNTIF. The syntax is =COUNTIF(B3:B8,"*") which counts any cells with characters in it. That’s what this wildcard character * means. You use the quotes to let Google Sheets know that it’s a character and the asterisks is a special character that means anything. So, this is counting cells if there’s anything. However, if you take a looked at the next column in the live spreadsheet or in the next image, you can see the value is 3 and not 2.

If you’re using the simple COUNTIF formula and you’re getting a number that’s higher than it should be, you may have some cells that have an empty space in them. They have a value, but you can’t see it. In the image above, C8 has one empty space in it. If you want to count that then you’re done here. The COUNTIF function with the asterisk is all you need. But, if you don’t want to count empty spaces, then you can use the function that we have in C10, =COUNTIFS(C3:C8,"*",C3:C8,"<> "). COUNTIFS means count if but plural so there are multiple criteria to consider. The first part is the same COUNTIF if there’s any character. But, we are saying also if it’s not just a blank space. When you put these two together in this compound COUNTIFS function, it doesn’t count the blank space that’s in cell C8.

So, column B is the easy way if you don’t have blank spaces. But, if you do have spaces, you want to use COUNTIFS. Keep in mind though, that the COUNTIFS above is just skipping cells with one space, you will have to extend the function if you have cells with multiple spaces.

A few things to remember are if the cell has a true/false value that’s not going to count. If the cell starts with a single quote, no matter what it has, that is going to count. Numbers are not counted by this function unless they’re entered as text. So another way to enter a number as text is to do the single quote then type 333. That’s going to be counted because it’s not really a number, it’s the word if you will 333. I hope that’s helpful, thanks!

Go to this spreadsheet for examples of COUNT that you can study and use anywhere you would like. 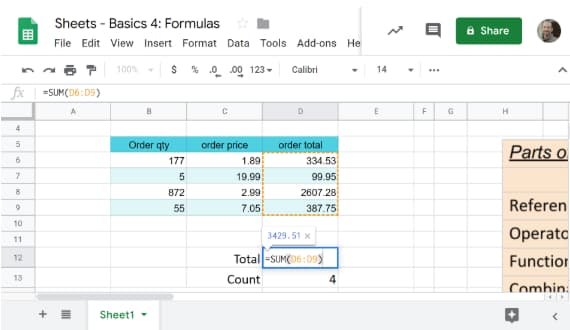 Learn all of the foundational skills necessary to create and use spreadsheets.

10 downloadable videos, LINKED GOOGLE SHEETS for you to copy and use, quizzes, and built-in notes. Lifetime access to the course.

Written and Maintained by Adam Steinfurth for ALS Properties, LLC.